I ran out of physical books to read, so it was time to go back to iBooks on my iPad. Nothing wrong with this as I have plenty of e-books I have accumulated on there over the months, I just rather read physical books personally. The book I decided to read first was..

Forget Me Not by A.M Taylor 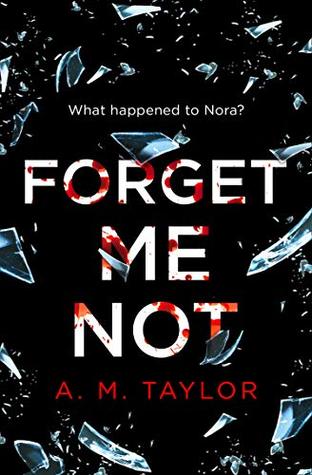 WHAT HAPPENED TO NORA?

When Maddie met Nora, their friendship felt as easy as breathing. And when Nora disappeared, all the air went with her. Without her best friend, Maddie’s life became impossible.

Ten years later, Nora is still missing and Maddie is still searching. People have been questioned. People have even been accused. But no one has managed to find Nora.

Then, in the same spot where Nora went missing, the murdered body of Nora’s little sister is found. Convinced this is no coincidence, Maddie resolves to uncover the killer and find Nora – dead or alive.

But will she be able to cope, when we learn what really happened to Nora…?”

The description of this book really grabbed me to want to read it. These are the types of books that I love, mysteries. Though I found the book quite slow to being with. It felt like it was a bit repetitive too. Until I got about two thirds of the way through, it got REAL good. It got so good I fought through tired eyes to get to the end of it, to find out what really happened to Nora, and her little sister, Noelle.

If you read this book, you’ll be pleasantly surprised of who the culprit was.

The book as a whole wasn’t really that exciting, it really dragged on at times, the only good part was at the end really! It wasn’t a fast paced book, that’s for sure. If your looking for something fast and exciting, this one isn’t for you. If you’re wanting a book that you want to get through slowly, and end with a bang, then you may enjoy this one!

The genre of this one is obviously mystery, thriller and fiction.

“A. M. Taylor lives and writes in London. When not making up stories, she writes copy for a living and can most often be found drinking coffee, watching Netflix, and trying to keep up with a never ending TBR pile. She’s been obsessed with mysteries ever since Nancy Drew first walked into her life and would probably have attempted to become a private detective at some point, if only it didn’t involve actually having to talk to people. She has a cat called Domino, ambitions of owning a dog one day, and is as obsessed with My Favourite Murder as you probably are.”

I rate this one a 6/10 – a little higher than average mainly because of the ending.

My little Pusheen plush collection 🥰 (my hubby got me all of these even though he hates Pusheen 😂)
Happy Saturday!! The weather is actually good for once for the weekend ☀️😂 I have just started a new book 📚 really looking forward to this one ☺️
Happy Saturday! This is how Kora is spending it 🤣💖
Finally onto a new book! I’m already 60+ pages in 🙈 My reading always seems to start strong at least 😂💪🏻
just before getting married 😘💍
*TW: Suicide*
Advertisements
%d bloggers like this: